Myth-busting the “Cows On Campus” Photograph

One of the enduring legends from the history of the University of British Columbia is that the Faculty of Agriculture’s dairy herd was once allowed to graze along Main Mall.  But did this really happen? 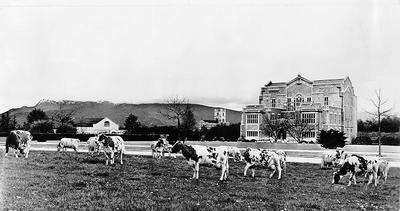 It is true that, during the Great Depression of the 1930s, the University’s budget for building and grounds maintenance was reduced so much that the lawn in front of the Library (now the site of the Irving K. Barber Learning Centre) was left uncut for months at a time, turning it into a “luxuriant hay field”.  It is also true that one of UBC’s most distinguished alumni and faculty, Dr. Malcolm McGregor, once wrote: “In the 1930s, when we could not afford to cut the grass, cows grazed in the area between Arts and the Library”. Finally, there appears to be photographic proof – an image supposedly dating from 1937, and later reproduced in a popular poster (right).

However, a close look at the image will show that it is actually a composite of two separate images (below). 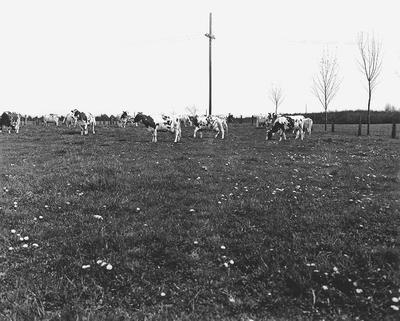 Both original images date from 1937, and are part of the Leonard Frank collection.  The composite dates from some time after that.

The fakery was discovered by former University Archivist Laurenda Daniells and her staff in 1974, when they began cataloguing the historical photograph collections.  “We found the two photos separately and because of the odd way one cow was standing it dawned on us that the cows on the library lawn photo was a fake”, she wrote later.

Fake or not, the picture was so compelling that it was printed on the cover of the 1979/80 Librarian’s Report to the Senate, with an explanatory caption: “In the thirties the University kept its books in the Library at one end of the Mall and its cows in barns at the other.  A bucolic vista such as this was a possibility, but this photograph was faked by a person whose name and motive are unknown.”

So much for the photographic “proof”. 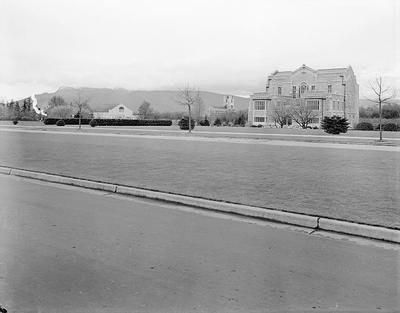 One would expect the story, if it’s true, to be mentioned in For All Thy Kith ‘n Kine, an account of the early history of the UBC Dairy Farm.  Written and published as a tribute to the first manager of the farm, Scottish immigrant John Young, and his family, it goes into detail about the farm’s operations during the Depression.  However, no mention is made about Mr. Young ever allowing his prized Ayrshire cows to graze on the lawn in front of the Library.

There is also no record of such an event in the pages of The Ubyssey.  One would think that the sight of cows grazing on Main Mall would have caught the attention of the often irreverent student newspaper.  Neither was it mentioned in other contemporary campus publications such as the Alumni Chronicle and the Totem yearbook, or in Harry Logan’s otherwise exhaustive history of the University, Tuum Est – published in 1958, when the incident would have still been in living memory.

As for Dr. McGregor’s account, he graduated from UBC in 1931, and he did not return to campus until 1954, when he joined the Department of Classical Studies.  He was almost certainly not present when the cows supposedly grazed in the heart of the campus – although other alumni and staff have told similar tales.  So if his story can’t be confirmed, who created the composite image, and why? 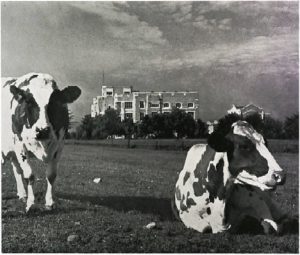 The forger’s identity remains unknown, but a clue as to a possible motive can be found in the 1939 edition of the Totem.  Page 21 shows a picture of two cows grazing in a field, with the old Science building (now the centre block of Chemistry) in the background (right).

Campus maps from that period (such as this one) confirm that the area south of University Boulevard was largely reserved for activities of the Faculty of Agriculture – including raising dairy cattle.  Cows did graze in open pastures there, and may have occasionally wandered north towards the centre of campus – attracted by the scent of luxuriant hay fields, no doubt.  So Dr. McGregor’s story, whether based on his own experiences or those of others, does contain a kernel of truth.

There is no obvious fakery in the Totem photograph, and there are no corresponding images among the UBC Archives’ historical photographs that could have been used to create it as a composite, so it is almost certainly genuine.  It is likely that this picture, together with memories or second-hand stories of cows wandering beyond their designated pastures – plus the desire to embellish a good story – served as the inspiration behind the now-iconic “cows on campus” composite photograph.